The above specimen of Tilapia sparrmanii — type species of the genus Tilapia — was caught in Lake Chilingali, Malawi, which is located some 11 km west of Nkhotakota (on the western shore of Lake Malawi). Prof. George F. Turner (Bangor University, UK) very kindly sent me his photo to display here.

For many years, I was not convinced that this widely distributed species ever occurred in Lake Malawi proper. Nevertheless, it has repeatedly been listed from Lake Malawi, first by Bell-Cross (1976), then by Bell-Cross & Minshull (1988), and most recently by Marshall (2011). None of these authorities provided any supporting details or literature citation. Furthermore, T. sparrmanii is also listed without comment from Lake Malawi by FishBase (see the species account of it there, which cites CLOFFA as the source of its distribution data. However, as I said, the occurrence of this cichlid in Lake Malawi seemed highly doubtful and I felt that it needed to be substantiated by a museum specimen.

However, I was finally persuaded by an email from Denis Tweddle (pers. commun. 27-Feb-2012) that this species should be listed as part of the fauna of Lake Malawi proper. Denis wrote that:

"I have never seen it in the lake itself but it occurs right on the edge and must occasionally get into the lake. It is abundant (or at least was in 1976) around the gabions of the bridge over the entrance to Chia Lagoon and that could be regarded as an inlet of the lake."

I have to agree. The road bridge over the Chia Lagoon inlet (which I have also driven over) is only 600 meters from Lake Malawi proper, as can be measured in Google Earth. Since Tilapia sparrmanii occurs in Chia Lagoon itself, and at the bridge over the inlet from Lake Malawi, and since the inlet is apparently quite uniform in habitat, one has to accept that it very probably also exists along the full length of the inlet and probably strays into the main lake on occasion. But, I would still like to see a voucher specimen or two collected from Lake Malawi and deposited in a museum!

George Turner added some further information about the distribution of T. sparrmanii in Malawi. He writes (pers. commun. 9-May-2013):

I also have never seen it in the main lake.... It's very abundant [in Lake Chilingali] and I think we also found it [in] small pools near the Sitima Inn right on the lakeshore. All this fits with the Tweddle ideas of it being able to get into the main lake relatively easily.

Oddly, though, I've not really found it anywhere else in Malawi except around the mid-western side of the lake roundabout Nkhotakota. It's also in the rivers and some of the crater lakes in the area around Kyela in Tanzania.

The color painting and the black and white illustration of T. sparrmanii below, both rendered by Hilda M. Jubb, are from Jubb (1967) and are reproduced here with the kind permission of Mr. A. T. Balkema of A. A. Balkema Publishers, Rotterdam. 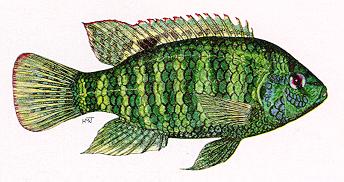 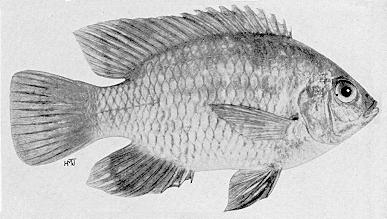