The attractively marked catfish in the drawing at right, Synodontis njassae, is the larger and better known of the two Lake Malawi catfishes belonging to the family Mochokidae (the other is Chiloglanis neumanni).

S. njassae is endemic to L. Malawi, where it is abundant on rocky shores (but it is by no means restricted to this habitat; see below). It also occurs in the inflowing streams.

This Synodontis is a good addition to an aquarium of Malawi fishes. Notes on its aquarium care, and photos of an individual with many small spots, are available in an article by Frank Panis at Malawi Cichlid Homepage.

Its color pattern is quite variable, with some individuals having many small spots, and others having only a few large spots. I collected about 500 specimens during rotenone sampling of rocky shores in 1980, and observed that the spotting variation appeared to be continuous, rather than falling into discrete "large spotted" and "small spotted" forms as many aquarists believe. Specimens with small, medium, and large spots are shown in a black-and-white photograph below.

Recently, Snoeks (2004b), without documentation, listed a "Synodontis sp. 2" from Lake Malawi, noting "it is my impression that there is at least one other Synodontis species in the lake." Snoeks did not divulge if his suspicion is based on color pattern, ecology, or something else. Until this hypothetical second species can be substantiated, I continue to regard S. njassae as a single variable species.

Synodontis njassae has a strong, sharp, serrated spine at the front of the dorsal fin and each pectoral fin. These spines can be locked at right angles to the body. The fish can also produce defensive squeaking sounds, which are easily audible through an aquarium glass, using its pectoral stridulation mechanism. The mucus covering the spines is apparently toxic. While netting stunned individuals during rotenone sampling, I was nicked on the thumb by the tip of a spine. Within a few seconds, the skin around the nick swelled into a tight, painful, almost hemispherical lump that took a couple of days to disappear; a small scar remains at the site of the puncture over 30 years later.

Because of these fin spines and its large, bony head, S. njassae (known to the indigenous fishermen as Kolokolo or Njekayeka, both words that probably imitate the squeaking sound the fish makes as just described above, and to Europeans as the Squeaker) is not an important food fish. It is, however, eaten when available. Some fishermen actually bite off the spines to make the fish safe to handle (see photo below left, by M. K. Oliver).

Food: Allison, Irvine, Thompson, & Ngatunga (1996) reported on the diets and food consumption rates of some common offshore pelagic fishes, including S. njassae. This catfish (again, to my surprise) feeds extensively on zooplankton, all day long but more intensively during the night when it is nearer the surface. The predominant food items found in >150 stomachs of S. njassae from 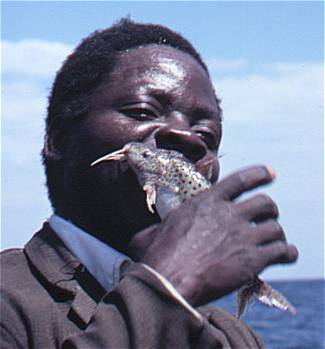 Thompson, Allison, Ngatunga, & Bulirani (1995) summarized what is known of the breeding biology of Synodontis njassae. The breeding site within the lake remains unknown. The eggs are tiny (0.16 mg per egg); fecundity is high, with a mean of 1341 eggs per fish (817 females examined). Although some females up to 14 cm (5½ inches) in length were immature, the average size at first maturity was estimated to be 11 cm (4.3 inches) and some females matured at 10 cm (4 inches). In ripe females, the ovaries can attain 8-9% of body weight. The authors found females ready to spawn throughout the year; no seasonality was observed. No larvae or juveniles were found offshore; individuals less than 10 cm (4 inches) in length were rare in the open-water zone. 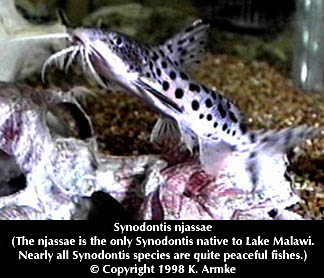 One of the puzzles of speciation in the African rift lakes is why Lake Malawi has only this one Synodontis, while Lake Tanganyika, with a smaller cichlid flock, has evolved a flock of at least 7 endemic species of Synodontis (plus two more widely distributed species).

Photograph at right © 1998 by K. Armke, from Armke's Rare Aquarium Fish; used with the kind permission of Ken Armke.