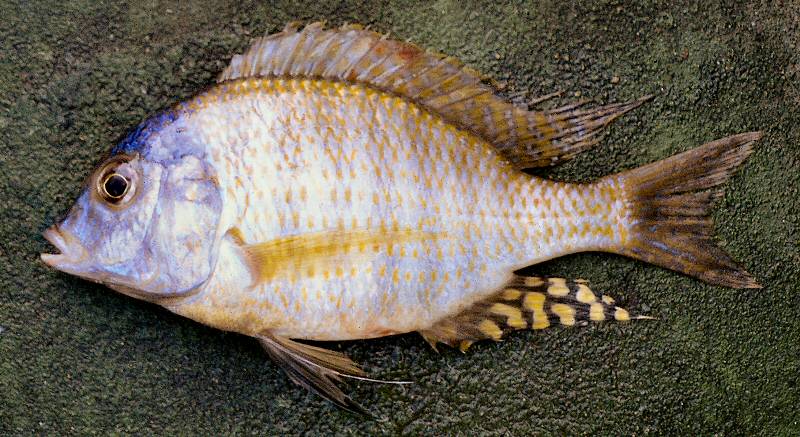 The maximum size of L. mylodon is at least 25 cm (10 inches) TL (total length). It feeds mainly on molluscs. The species is known from the SE Arm, Nkhotakota, and Nkhata Bay, from depths of 40 to 70m (130-230 feet) in the SE Arm, and as deep as 110m (360 feet) off Nkhotakota. Populations in the SE Arm declined drastically from the early 1970s to the 1990s, probably as a result of intensive trawling in the area.

Eccles & Lewis (1979) described a northern subspecies L. m. borealis on the basis of its lower pharyngeal bone, which is more elongated and with a markedly concave lower surface. This form was collected from Nkhata Bay, while L. m. mylodon is recorded as far north as Nkhotakota. Konings (1990a, 1995c) regarded the difference in pharyngeal bone shape as sufficient to elevate these two forms to the level of species. Given the known phenotypic plasticity and polymorphism of pharyngeal structures in cichlids (Kornfield 1991), even subspecific status seems dubious. Eccles & Lewis's material consisted of twenty specimens from Monkey Bay but only 9 from Nkhata Bay, 7 of which were mislaid after the description. This number is perhaps insufficient to indicate sympatric polymorphism. The Nkhata Bay material was collected in 1960-61, and Eccles & Lewis did not observe the live colours of the specimens. Konings has not observed the northern form in the field, and apparently nor has anyone else.